A Kinder, Gentler Sort of Summer

I don’t remember my summers as a kid being the least bit hectic, never mind structured. As I recall, summer was an exercise in deliverance and spontaneity—an intoxicating river of endless days and weeks, blurred at the edges, verdant at its core, punctuated by dozens upon dozens of delicious remembrances that pool in the corners of my mind even still.

There was no glorified schedule or master plan that bound me to times or places, unless you consider the regularity with which my dad and I watched late-night Yankees games together in our living room, the ceaseless drone of the big box fan humming in the background like a raspy biplane. There were no obligatory to-do-list items I felt necessarily compelled to realize before heading back to school either, except, of course, the ones that involved harvesting baseball cards, tooling around on my banana seat bike and acquiring a new pair of Converse All-Stars. Low-tops. Black.

Summer was a time to relax, recondition and, on occasion, run away from home—an impulsive act of stupidity, inspired largely by gypsies and like-minded 11-year-olds who felt stifled by boundaries of the parental variety. But I digress. Of all the seasons of my childhood, summer was far and away the most delectable.

That said, my younger brother and I practically lived in our backyard swimming pool, until the laze and haze of August segued into the rush of September, its bright yellow school buses and freshly waxed floors jolting us back 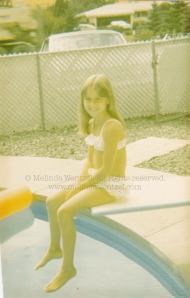 to a different sort of reality. When we weren’t paddling around in big, rubber inner tubes or diving to the bottom in search of stones or coins, we could be found at the water’s edge immersed in a game of checkers on a giant beach towel, an island of sundrenched bliss. Other days we’d disappear deep into the woods, climbing trees and cobbling together all manner of poorly constructed forts with a motley crew of neighborhood kids, hammers and nails we pilfered from our fathers and wood scraps we managed to haul there, one armload after another. Brambles and poison ivy be damned.

We logged countless hours of Wiffle ball and badminton, too, threw Frisbees at dusk till no one could reliably see and lay in the cool grass, pausing just long enough to watch the vermillion skies fade to purple, then to wooly gray and eventually, to an inky black canvas dotted with a smattering of stars—some bright, some barely discernible as the shroud of night consumed every tree, thicket and barefoot child in its path. Multitudes of fireflies took center stage then, materializing out of nothingness it seemed, ushering in the goodness of many a summer’s night.

Shortly thereafter, we assembled the masses for hide-and-seek, a spirited game hopelessly devoted to perpetuity and the governance of an ungodly amount of acreage, encompassing the far reaches of one’s neighborhood long after the woods grew thick with mosquitos and alive with a chorus of crickets. Sweat-soaked and breathless from giving chase, we eventually headed home, having heard the familiar thwack of a certain screen door coupled with our parents’ demands to come inside, signaling an end to this and so many good nights of summer. But our bedrooms would soon be dappled with the morning sunlight, and the promise of yet another endless day of summer beckoned unremittingly.

By today’s standards, I fear what I’ve described above would qualify as dreadfully dull. There were no cell phones to speak of, no iPads in existence and not a single app involving demonic monkeys or angry birds had been so much as imagined. By and large, moms didn’t run taxi services for their children in the summertime. Nor did they farm them out to an embarrassment of camps or overload their schedules with a glut of culture and tutelage and the insanity that fuels organized sports.

Times were simpler then. Less harried, and more memorable, methinks. Perhaps because the tapestry of summer was woven at a kinder, gentler pace, helping us all to find joy in the ordinary.

Planet Mom: It’s where I live (remembering when summer was really summer). Visit me there at www.melindawentzel.com and www.facebook.com/NotesfromPlanetMom.

Filed under "N" is for Nostalgia, Endless Summer, Unplugged

Sunday afternoons are my respite in this harried place. The sanity cocktail from which I draw sweet sustenance. That said, I lounge around the house doing as little as humanly possible, embracing my inner sloth. Old movies, blanket forts and naps rule the day. That is not to say that I haven’t, on occasion, become inspired enough to throw something meaty in the crock-pot, to haul my sweeper from the bowels of its dusky lair or to plant my sorry self in the laundry room for a time despite my aversion to the insufferable place. Even on a Sunday afternoon. But for the most part, ambition is nowhere to be found in my house during that glorious wedge of downtime—sandwiched deliciously between the madness that was and the madness sure to come. Last Sunday, however, was decidedly different. Havoc rained down on my world, obliterating my precious corner of calm.

Oddly enough, what led to the aforementioned began weeks ago while traipsing through a store, my cart piled high with a bunch of schlock I didn’t need. At every turn, it seemed, I stumbled into EVEN MORE SCHLOCK and felt compelled to ogle it, to finger its veneer of worthiness and to toy with the notion of adding it to my ever-growing mound of that-which-I-would-one-day-regret-purchasing. And on the days during which I allow the guilt of motherhood to consume me, the mound is markedly higher. Needless to say, it was one of those days.

Indeed, the voices that drive much of my irrational behavior relevant to Thing One and Thing Two were especially persuasive that day, whispering words of admonishment in my ear and regaling in my grand ineptitude as a parent: “You’re a HORRIBLE MOTHER…you don’t SPEND ENOUGH TIME with your children…you MUST ACQUIRE this ten-dollar nugget of wonderfulness which promises to erase weeks of botched parenting.” All the while I considered said nugget of wonderfulness (i.e. a two-pound Chocolate Cookie Halloween House Kit, complete with 47 bats, dozens of little green candies I would later damn to hell, enough gumdrops to coat eleventy-seven teeth and an expander, a defective ghost—or rather, segments of insanely sweet candy, suggestive of something that was once intact and specter-like—and a cauldron full of powdery mixes that were sure to deliver hours of goo-inspired, edible fun and to yield the most perfect hues of orange and purple icing on the planet).

In the end, I was shamed into buying the box of foolishness. Because that’s what moms do. Just like all the other project-y stuff I haul home out of sheer guilt; never mind the games and books and techno-gadgetry thought to engender this or that brand of awe in my children. It’s all about the Is-it-as-remarkable-as-a-pony factor and Will-it-expunge-from-the-record-my-screw-ups-to-date?

So I shoved the stupid thing in our pantry (good intentions and all) and forgot about it till the Halloween craze struck with a vengeance. And since the celebrated costume drama in this household was officially over, a sinful quantity of sugary treats had been stockpiled already and virtually every corner of our home had been festooned with all-that-is-Halloweenish, there was but one thing left to do—build the stupid house. So that’s what we did—the three of us, while Dad cheered exuberantly from the sidelines.

Several hours, two meltdowns (both mine) and a hellacious mess later, we had our two-pound Chocolate Cookie Halloween House. Of course, the orange and purple mixes wound up adorning everything kitchen-ish but the inside of the refrigerator, those reprehensible, little candies rolled near and far much to my chagrin, fistfuls of trimmings were consumed with wild abandon and the icing was less than compliant as I shoveled and smeared gobs of it into pastry bags and then squeezed the reluctant mass onto the house as instructed. Translation: The cussed gloppage in question delighted in its schmutziness and its droopiness, defiantly sliding down walls, windows and slanted rooftops, leaving hideous-looking blobs everywhere. Even the spider webs I made sagged to the point of looking not-so-spider-webby. But because the gods of kitchen fiascos were smiling upon me, my brood took it all in stride, “…the droopiness makes it even SPOOKIER, Mom! You’re so AWESOME!”

Well, it certainly wasn’t as grand as a pony might have been; but the awe factor of this nightmarish project was evident to at least two somebodies on the planet. And perhaps that’s all that matters in the end.

Filed under "G" is for Guilt, Daily Chaos, Holiday Hokum, Rantings & Ravings, We Put the Fun in Dysfunction