Trust Me; The FBI Wouldn’t Want my iPhone 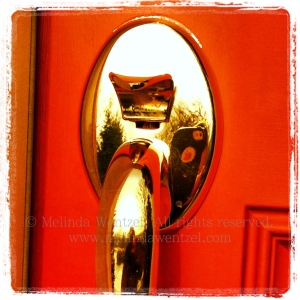 I have an iPhone, similar to the one that caused the hullabaloo in the news cycle in recent weeks. As you might recall, there is a great deal of controversy surrounding the issue of privacy and national security as it relates to the San Bernardino shooters. In sum, the FBI wants to extract data from a particular iPhone owned by one of the gunmen, Syed Farook, in hopes of obtaining more information about the December attack in California.

Like a lot of people, I have mixed feelings about the matter since I can clearly see the benefit of unlocking the device in order to learn more about the crime’s particulars, yet I can also envision the potential negative of such an encroachment, setting an unwelcome precedent that may affect law-abiding citizens. As is the case with so many conundrums, knowing what is right is far more difficult than doing what is right.

One thing I know for sure, however, is that the FBI wouldn’t want my iPhone under any circumstances. Trust me. If, in fact, the government were to confiscate it, I’m certain they’d be disturbed by a number of things that would likely cause them to chuck it in the nearest river. First and foremost, they would be horrified by the egregiously unimaginative set of numbers I’ve assigned to its passcode—much like the predictable nature of those I use to guard practically everything in my life.

What’s more, they would be appalled to learn how many times my kids text from school to tell me they forgot

something of vital importance, how often I ignore the directional advice of Google Maps and wind up perfectly lost, or the amount of time my husband and I discuss dog poop. Yes, dog poop. (It’s a long story and you probably wouldn’t be interested). At any rate, officials would also discover the unhealthy obsession with which I text in complete sentences, almost always using proper grammar, capitalization and punctuation—to a fault. My teens, of course, have come to expect such dysfunction in our family, but even still they roll their eyes at me. “Who does that?” they’ll ask with more than a little disdain.

Furthermore, I have serious issues with misspelled words and inadvertent omissions within my messages. Needless to say, it kills me to send them out into the world like that—broken and/or woefully incomplete. That said, I am positively fixated upon retyping them until they’re right. It’s a sickness, I know. By the same token, using abbreviations for common words or phrases would imply that I’m beyond lazy, and I’m simply not ready to admit anything of the sort to the government or to anyone else. Also, relying upon Siri to translate my speech into text while I’m driving is just

asking for trouble. Quite frankly, she never gets it right, and then I have to pull the car over, delete her drivel and retype the stupid message—the one that could have been delivered long ago had I simply taken the time to hunt and peck on my tiny keyboard. 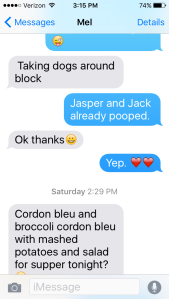 In a related matter, I’m convinced that AutoCorrect is demonic and revels in its ability to thwart my repeated attempts to curse. After dealing with Siri’s ineptitude, it’s no wonder I feel compelled to use colorful language. So, of course, I persevere despite being hampered by the evils of spell-check gone awry. If nothing else, the FBI would be inspired by my determined efforts. Probably.

By contrast, it’s likely they would be largely uninspired by the cache of photos stored within my phone—the ones that feature food on a plate, unabashed selfies with my dogs and a PROFUSION of odd pictures and videos that my kids have taken upon hacking my phone. Because, of course, they think it’s funny to zoom in on chin rolls and nose hairs.

In sum, I think it’s safe to say that my iPhone won’t be seized by government officials anytime soon.

Planet Mom: It’s where I live. Join me there at www.facebook.com/NotesfromPlanetMom.

Comments Off on Trust Me; The FBI Wouldn’t Want my iPhone