The Benefit of Boredom

As fellow columnist Scott Lowery (of Scott on Sports fame) cleverly predicted, it’s barely summer and already the dreaded words, “I’m bored,” have been uttered here. I had hoped we’d make it through a goodly portion of July before my brood succumbed to the evils of ennui. But no.

The fearsome phrase, in actuality, surfaced shortly after school let out—which is almost inconceivable given the embarrassment of activities my charges have been afforded since that time. To date, Thing One and Thing Two have engaged in roughly 37 epic squirt gun battles, 20 bazillion glee-filled runs through the sprinkler and untold face painting sessions that frequently gave birth to goatees, hideous-looking mustaches and Cesar Romero-inspired eyebrows. Oy.

They’ve also had immeasurable fun analyzing clouds and bugs, building forts and baking mud pies, launching Ken and Barbie into the stratosphere (don’t ask) and, of course, chasing the fleet of ice cream trucks that frequent our neighborhood. Frisbees, too. What’s more, they’ve logged countless hours on their beloved scooters and bikes and reveled in the company of both PhotoBooth and their Wii (i.e. the hi-tech household contrivances I have yet to fully embrace despite their collective allure). Furthermore, they’ve had the luxury of attending a multitude of wonderful camps, a handful of baseball games and picnics, a ginormous family reunion and at least one road trip during which the Alphabet Game was played till I was ready to spew forth consonants. As one might expect, they’ve also spent an inordinate amount of time holed up at friends’ houses, consumed enough S’mores for six people and disappeared within the pages of more books than I even owned at the tender age of ten.

That said, their whiny claims of “having nothing to do” are completely unfounded. Of course, this is largely due to the fact that I tried very hard to preclude tedium from ever darkening our door—filling our calendar impossibly with that-which-seemed-perfectly-feasible-at-the-time. Better still, I lived up to my tyrannical repute by filling my brood’s hands with some fairly brilliant workbooks as soon as the last school bell rang and laid down the law with respect to playing a certain French horn and clarinet.

Needless to say, my demands were less than popular with the aforementioned youths—the ones who passionately proclaimed they’d be scarred for life. “Nobody else’s mom makes their kids DO WORKBOOKS AND PRACTICE INSTRUMENTS ALL SUMMER LONG. That’s just plain mean.” At which point I named names and provided compelling data in order to prove that I wasn’t the only horrible mother on the face of the earth. Furthermore, they were in good company which became increasingly evident to one and all. Lo and behold, after weathering a brief period of time during which there was great wailing and gnashing of teeth, my mandates have since been met with only the slightest of grumblings each morning.

Even still, they grouse about a so-called dearth of diversions to occupy their precious time—the time, apparently, when they are not engaged in any of the abovementioned pursuits. Such thinking doesn’t even live on the fringe of logicalness in my mind, and quite frankly, I resent being saddled with the arduous task of finding stuff for my perfectly capable progenies to do. What am I—the Entertainment Captain?! The glorified Coordinator of Fun and Unending Amusement?! Like Amy Sorrells, a Times Sentinel Columnist recently lamented in her article, “The Day I Resigned as Camp Counselor,” I, too, begrudge the thankless post.

Besides, there is a school of thought that suggests boredom is a good thing. Peter Toohey, author of 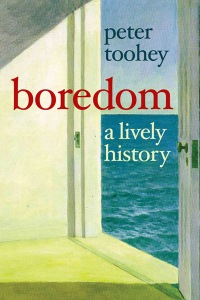 Boredom: A Lively History, argues that said affective state has been an essential part of the human experience for thousands of years and is thought to be a constructive force—one that has stimulated creativity in both art and literature the world over. Geez, I’d be happy to learn that it drives idle kids to action—better still, to extract joy from that-which-was-once-deemed-dreadfully-banal.

In light of the above, perhaps I should celebrate the words, “I’m bored,” and brace myself for the deluge of inspiration sure to come.

Planet Mom: It’s where I live (helping my charges leap into the great abyss of boredom—one idle moment at a time). Visit me there at www.facebook.com/NotesfromPlanetMom.

Comments Off on The Benefit of Boredom

Filed under The Natives are Decidedly Restless