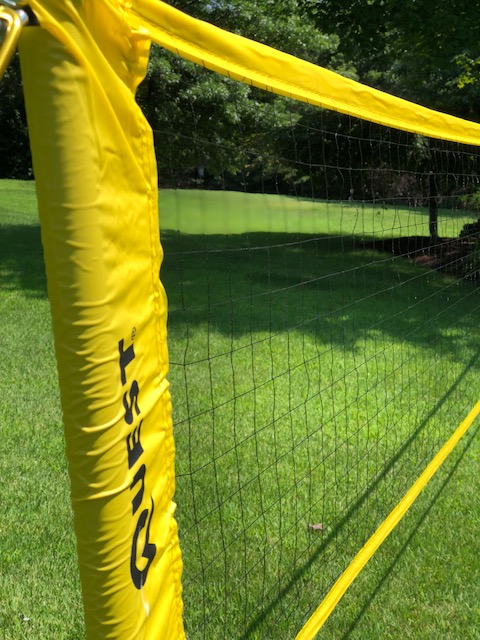 My husband and I have a badminton net in our backyard currently, which is terrific, except that it required two master’s degrees, a fair amount of duct tape and an afternoon of misery to set it up. Confession: We probably could have used a marriage counselor or two, but none were available at the time. Truth be told, the net that is now up is a new one we purchased because we gave up on the possibility of ever successfully assembling the old one—last year’s model, dredged from the depths of our pitifully disordered garage.

Naturally, we didn’t accept defeat immediately upon learning that things weren’t going well. No one ever said we were gifted. Instead, we soldiered on, struggling in the heat for what seemed like an eternity, wrestling with a tangled mass of string and a net that was evidently too heavy for our flimsy poles. Never mind our pathetic arsenal of metal stakes—the ones that warped irreparably as we attempted to hammer them into the impenetrable ground. But because the gods were smiling ever so slightly, no one smashed a finger. I suppose I should be grateful for small mercies.

After a time, it became apparent that we would fail in our quest to set up the wretched net. I’m not sure if it was our collective realization that the plastic poles would continue to bow and eventually snap no matter how hard we tried to prevent that from happening or if it was the way the net kept sliding to the ground despite our best efforts to tie the aforementioned string into knots at the top of each post. Hence, our ill-conceived need for duct tape. Note to self: It’s always a bad sign when, in desperation, one resorts to using duct tape. When all was said and done, perhaps we acknowledged that our labors would ultimately fail when we discovered the ends of the segmented poles were damaged beyond repair after having hit them several dozen times with a 5-pound mallet. Again, I can’t emphasize the degree of idiocy that was on display that day. In a word, it was epic.

As our hope began to fade and our bodies literally baked in the sun on that fateful afternoon, I began to wonder just how many neighbors were witnessing our exercise in futility as it unfolded there in the lawn in all its glory. It had to be comical to watch, much like a circus governed by Murphy’s Law—only there was a lot less skill and far more cursing. I’m quite sure a number of people chuckled at our profound stupidity as we darted back and forth between the poles like fools, eventually throwing the mangled stakes and jumble of string to the ground in disgust.

I never remember my dad having such issues, although it’s likely he did given that he wasn’t especially mechanical and often relied on a hammer to fix just about everything. As a kid I suppose I didn’t worry much about how the badminton net would be set up—only that it would be set up. Magically, it seemed, the net would appear in the lawn each summer. And it didn’t matter to me that it might have been crooked or drooping in the middle, although I can’t reliably recall that bit of detail. I only remember being immersed in the game for hours on end, whacking at shuttlecocks with my brother as night fell, fireflies blinking all around us, the cool grass beneath our bare feet. It was our summertime ritual.

Every kid needs a summertime ritual like that—even if it requires parents to lose their collective minds in the process. Looking back, I can fully appreciate the sacrifice my parents must have made, as well as my husband’s since he not only toiled in the yard, but also spent an entire afternoon in search of a reasonably priced replacement for our misfit-of-a-badminton-set. Seventeen phone calls, four stores and one meltdown later, he succeeded.

But it was so worth it.

Planet Mom: It’s where I live, probably playing badminton. Visit me there at www.facebook.com/NotesfromPlanetMom.

Comments Off on Oh, Shuttlecock!

Filed under "N" is for Nostalgia, Endless Summer, Ode to Embarrassment, Rantings & Ravings, We Put the Fun in Dysfunction