The Lingo of Parenthood: A Curious Addendum 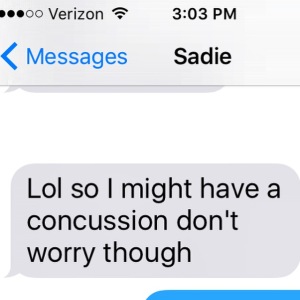 I’m convinced there aren’t enough terms in the English language to adequately reflect upon my harried life as a parent. More specifically, there ought to be words that, when cobbled together, help us to more effectively define the indefinable and/or express the mélange of exasperation, angst and joy we sometimes feel throughout the course of a typical day. To that end, I’ve developed a handful of new terms to expand upon the current vernacular.

CELL PHONE CIRCUS: The crazed barrage of texting/phoning that takes place in order to arrange for a friend or relative to pick up one’s child/children after school or an activity in the event you can’t possibly do it. Of course, you don’t realize you can’t do it until it’s almost time to pick up the aforementioned waifs, at which point you become panic-stricken, not to mention mortified by your failure to anticipate such a circumstance. Out of sheer desperation, you then phone or text eleventy-seven different people, highlighting your stupidity, spelling out the logistics involved with the proposed pick up and promising a pony to anyone who says “yes.” With any luck, someone will come to your rescue and haul your brood home.

PARKING LOT PURGATORY: The indeterminate wedge of time (i.e. roughly a century) during which parents sit in their cars in the parking lot at school, at the soccer field, etc. in anticipation of the emergence of one’s child at the conclusion of the event in question. Naturally this happens because the scheduled end time isn’t remotely related to the actual end time. Invariably, we are the last to know. To add insult to injury, our kid clearly has a knack for being dead last. Every. Single. Time.

FESTIVAL OF MOODS: The kaleidoscope of emotions our progenies (especially of the teen and tween variety) demonstrate, ranging from the pinnacle of euphoria to beyond the point of surly. Over time, we have come to expect the unexpected, yet we never quite know which disposition will be featured at any given moment—which makes dealing with it even more thrilling (not so much). The only thing we can be sure of is its highly changeable nature. And drama. Lots of drama. Like so many things that fall under the umbrella of parenthood, it goes with the territory.

DREAD-MONGER: A parent who is routinely plagued by an overwhelming sense of irrational fear as it relates to an unfounded belief that something horrible has happened to one’s child. The trigger could be the text you receive informing you that he or she might have incurred a concussion. Of course, your child assures you there is no reason to be alarmed—unless you find certain statements disturbing such as: I’m a little confused and nauseous because a huge shelf fell on my head and “…IT FELT LIKE MY BRAIN BOUNCED.” It could also be the itchy rash that mysteriously shows up three weeks into a course of antibiotics—the rash your child cleverly documents with a series of photographs, texting them to you in succession from school to make you INSANE with worry to brighten your day. Making matters worse, you Google the symptoms and brace for impending doom. It’s what you do.

EMBARRASSMENT BY ASSOCIATION: The act of offending one’s offspring simply by being alive. More specifically, when your kids reach that magical age we all know and love, they become completely mortified by your presence—to include the way you walk, talk and breathe. Heaven help you if you happen to sing in front of their friends, set foot in their classroom or step within 400 yards of their school bus.

NEW AND IMPROVED WALK OF SHAME: The familiar excursion you make from your car to the school office, delivering yet another item your child forgot—something vital to his or her existence. Like so many times before, you hang your head as you place said item on the counter, vowing that it will be the last time you behave like a helicopter parent. Probably.

RANDOM HUG FEST: Spontaneous displays of affection in the form of hugs, given freely by one’s child/children for no apparent reason whatsoever. The impulsivity and genuineness of such an expression of warmth, if nothing else, reminds us that we are loved despite our innumerable flaws. Savor each and every one of them.

Planet Mom: It’s where I live. Join me there at www.facebook.com/NotesfromPlanetMom.

Comments Off on The Lingo of Parenthood: A Curious Addendum

Filed under In the Trenches of Parentville, We Put the Fun in Dysfunction